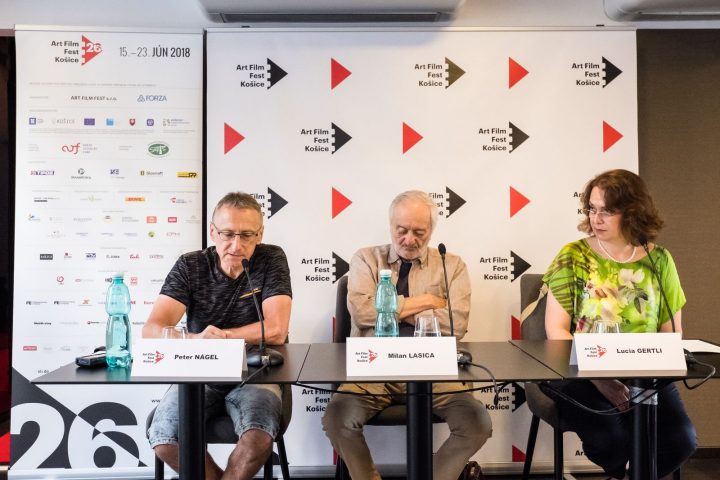 Hot new releases from the recent Cannes Film Festival, including the this year’s Palme d’Or winner and an array of other must-see films, along with a range of red-carpet guests ­– all this awaits at the 26th Art Film Fest in Košice, starting in just 10 days with a programme full of attractions.

The International Competition of Feature Films will include One Day (Egy nap, 2018), which director Zsófia Szilágyi has described as “a matrimonial thriller”. The film earned her Cannes’s FIPRESCI Award for best debut. Premiered at the world’s most prestigious film festival, AFF competition film The Load (Teret, 2018), from director Ognjen Glavonić, takes viewers on a lorry ride from Kosovo to Belgrade during the bombings of 1999.

Audiences will travel further into the past with The Summer (2018), a nostalgic remembrance of 1980s Leningrad. The film’s director, Kiril Serebrenikov, wasn’t able to attend its premiere in France, as he has been under house arrest since the spring. Polish filmmaker Pawel Pawlikowski personally attended Cannes, coming away with the Best Director award. His romance Cold War (Zimna wojna, 2018) tells a passionate love story over the backdrop of the events of the 50s and 60s in Poland and France. Both titles will be screened in the Art Film Fest section European Corner, as will the fiction film from documentarian Sergei Loznitsa – Donbass (2018). This portrayal of the hybrid war in Ukraine doesn’t shy away from black humour and, like Loznitsa’s previous films, has been stirring up controversy from its very premiere. The film earned Loznitsa the Directing Prize in Cannes’s Un Certain Regard competition.

Director Joe Penna’s Arctic (2018) was named by Variety magazine as one of the best films screened at Cannes this year. Actor Mads Mikkelsen’s death-defying journey across the frozen wastes is being presented as part of Art Film Fest’s section Around the World. The section will also include the latest film from director Spike Lee: BlacKkKlansman (2018), the true story of an African-American police officer who infiltrated the Ku Klux Klan. Audiences at Cannes gave it an eight-minute standing ovation; the jury gave it the Grand Prix. Among the films in AFF’s Amphitheatre section will be biographical documentary Whitney (2018), where director Kevin Macdonald draws upon exclusive confessions from dozens of people close to singer Whitney Houston over the course of her tumultuous life. Following the film’s Cannes premiere, Art Film Fest audiences will see and hear truths and myths about the legendary artist on a larger-than-life screen at the Košice Amphitheatre.

Over the festival’s nine days, Art Film Fest will host a pantheon of cinematic luminaries from the world over, and many of them won’t leave Košice empty-handed. The festival’s Actor’s Mission Award honours performers for their extraordinary contributions to the art of acting. At the 26th edition, the award will go to two actresses – one from Slovakia, the other from the Czech Republic. The first will be Zuzana Mauréry, multiple winner of Slovakia’s Sun in a Net Awards and beloved film, television and theatre actress, whose career has extended beyond the borders of her home country.

The second, Ivana Chýlková, is among our western neighbour’s most sought-after film stars, holder of a Czech Lion and three-time winner of the TýTý audience-choice prize for most popular television actress. Aside from screens big and small, she is also active as a stage actress, and like Zuzana Mauréry, she has even appeared in musicals.

Every year, Art Film Fest awards significant contributions to cinema with the Golden Camera. This year’s laureates are two filmmakers, each with an unmistakable signature and international acclaim. Agnieszka Holland is a distinguished Polish film and television director and screenwriter who has managed to establish a career abroad as well. She has two Oscar nominations to her name, a Golden Globe for Europa Europa (1990), and 11 Czech Lions for her miniseries Burning Bush (2013). At last year’s Berlinale, her film Spoor (Pokot, 2017) earned Holland a Silver Bear. Both feature-length films will be screened at this year’s Art Film Fest.

Alexei German Jr. is the son of famous Soviet director Alexei German and the grandson of writer Yuri German. Captivating audiences with their narrative style and mesmerizing atmosphere, his films have received numerous awards at the world’s most prominent festivals. His Under Electric Clouds (Pod elektricheskimi oblakami, 2015) earned the filmmaker Berlin’s Silver Bear for Outstanding Artistic Contribution. This year’s Berlinale saw the premiere of his latest film Dovlatov (2018), depicting the circumstances of artists whose talents were stifled by the Communist regime in the early 1970s. His efforts were once again rewarded with a Silver Bear.

This year’s Art Film Fest International Film Festival President’s Award will be granted to Fero Fenič, a major figure of Czech and Slovak audiovisual culture. The creator of fiction and documentary auteur films and founder of the independent film and television production company Febio and the festival Febiofest will present his own section of films at the festival, entitled Fero Fenič Special. The section will feature his own work, as well as pictures that have affected or surprised him as a viewer.

All in all, over 200 feature-length and short films, dozens of inspiring guests and a varied accompanying programme awaits at Art Film Fest in Košice, from 15 to 23 June 2018.

Organizers: ART FILM FEST s.r.o., FORZA, a.s.
Co-organizers: The City of Košice, K13, the Košice Self-governing Region
The festival is held under the auspices of Prime Minister of the Slovak Republic.
Financial support: The Audiovisual Fund
The festival is made possible by the financial support of the Košice Self-governing Region.