Interview with Zuzana Mauréry: I always like to play a part I've never played before • Art Film Fest
00

Interview with Zuzana Mauréry: I always like to play a part I’ve never played before 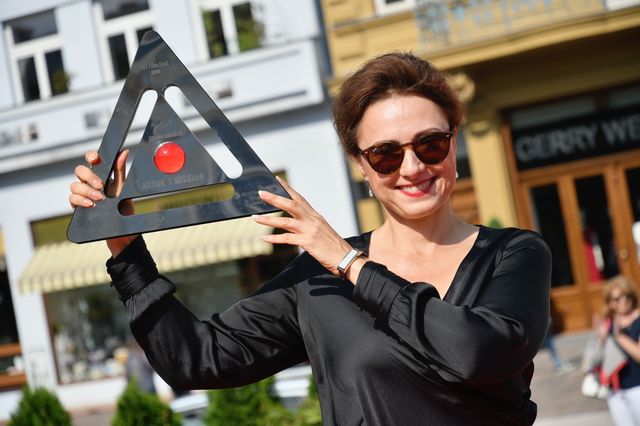 As a child she would fly to Košice to see her father, who had an engagement at the opera.And when she came of age, she also joined the world of culture and the arts,particularly taking to singing and acting. She has put her talents to use both at home and in the Czech Republic and Austria,applying her broad dramatic range to the stage, television and cinema. Zuzana Mauréry is a guest of honour at the 26th Art Film Fest, which has presented her with the Actor’s Mission Award.

At the opening ceremony you accepted the Actor’s Mission Award.In the past the award has gone to numerous distinguished actresses and actors from Slovakia and beyond.At Karlovy Vary the year before last, you received the award for Best Actress.How do you feel about film festivals?

I haven’t actually been to so many film festivals.I observe things from a bit of a distance; I watch what happens at these festivals, how it all proceeds.I appreciate being able to get to know different people and learn how things work in other filmmaking worlds.I mean, this is the first time in my life I’ve had my own press conference! (laughs)I’m an actress and I’m vain, I’ll admit.That means receiving such an award naturally feels good; it’s something I appreciate.I also think, and my experience attests to this, that it’s a pleasant social shifting of gears. Unfortunately, it isn’t the case in Slovakia that you win an award and suddenly they rush out in droves to see you.But I appreciate it all the more when it’s an award from people in the trade, when they somehow validate that you’re good at what you do.It’s the best when colleagues recognize your work, even better when it leads to more work with good people.

It would seem you have good luck when it comes to award-winning titles.Both films you appear in at this year’s festival – Mátyás Prikler’s Fine, Thanks and Jan Hřebejk’s The Teacher – earned you a Slovak national Sun in a Net award.Prikler was still a student at the time; you worked with Hřebejk when he was already experienced and successful.Can these two collaborations be compared?

In my opinion, they can’t.With Mátyás’s film I really suffered. (laughs)You know how it is, these students, they’re always trying something new, and it was just my first or second film as well.And when, after two hours of shooting a difficult scene with Attila Mokos where we also had a dog and children, he just said “Fine, that’s a wrap”, I thought I was going to kill him. (laughs)That was one experience.But I think the result was worth it, since he tried, through thick and thin, to keep things authentic. And I really liked the screenplay.It was sort of a happening.

The film with Jan Hřebejk was a breeze.Maybe because it was free of ambition, people trusted each other; there were never any conflicts of opinion.We all went in the same direction, through the same river, punctuated by the occasional “Pick up the pace” or “You can do it.”It was lovely, more or less smooth sailing, maybe in part because I’d already had some experience, and you have to be prepared for such an opportunity.

After the success of The Teacher, it looks like the film roles have started pouring in.Are you enjoying all this?

There’s always this stage in life when your career starts accelerating to the point that you need to step on the brakes.Consider whether it might be time to start living a different life.And that’s what I’m faced with right now.I’m supposed to do a two-part film for Czech Television – Štokholmský syndróm [Stockholm Syndrome].With Ivo Trajkov I should make Piargy, a beautiful film.I’m really looking forward to that.The series Oteckovia [Dads] is carrying on, and I’m doing a short series for TV JOJ.